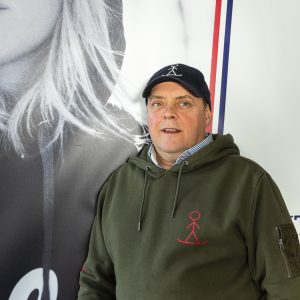 After juggling with bring up my daughter and managing a successful dry lining and shop fitting company in London, I decided in 2010 to move to the French Alps with Ellie to chase a better quality of life.

When Ellie was 12 years old she had taken up snowboarding at school and was spotted by the GB snowboard squad who invited her to trial for them. It soon became very obvious that Ellie had a natural talent on a snowboard and within one month of being on the GB Elite junior squad became British champion.

I as a father I new nothing about snowboarding and just let her progress as she wanted with out any parental pressure, but loads of support as I was so proud of what she was achieving.

As Ellie moved up the rankings, so did the cost of maintaining her competitive coaching. Ellie was acutely aware that funding from the bank of dad was stretching my financial resources to uncomfortable limits but I always said to her that I really would not do it if I didn’t want to. I spent hundreds of hours trying to raise funding for her and all the time you see your daughter enjoying a sport so much and achieving in it, it just made me so proud so I was not going to change.

The pressure Ellie put on her self to succeed was immense. This would have been due to being fully aware of the sacrifices I had made as a father and the unbelievable kindness of private sponsors, family and friends. As a now teenager all of Ellie’s friends were out partying as you do at 16, 17 years old, but this was something that Ellie found extremely difficult to deal with. Being an elite athlete you are often away training for weeks on end during a winter competitive season and 3 months in the southern hemisphere during the summer, not able to associate with close friends. So when you are in their company you want to hang out with them as much as possible but in reality can’t be seen to be doing this. Ellie being the fun loving free spirited young lady she was found this almost unfair.

One thing that really concerned me was the fact that she had suffered four concussions over the last four years, each time becoming worse. I took advice each time from doctors and even neurologists as to whether there was any long term effects that should make us call an end to her snowboarding career but was told as long as she took the correct amount of time to fully recover Ellie was at an age that should not cause any long term effects.

“Unfortunately, it appears this certainly was not the case and in November 2017 Ellie suffered a bout of severe depression now thought to be brought on by concussion. At the time we were making decisions together about whether Ellie should concentrate on schooling and becoming a normal teenager or continue with the pressures of being an elite athlete.  Thereby forfeiting normal teenage life, a full education and the negative jealous social media she was receiving by being in the position of an elite athlete.  Along with risking further injury that could put a stop to it all in a heartbeat.”

Ellie decided to push on with what she loved the most Snowboarding, however without funding was unable to train and compete in the capacity that she should have doing.

Only competing in the Junior Freeride World Tour and World Championships in which as a doting dad I trailed all over Europe with her to enable her to keep up a profile a professional athlete.

In March 2018 Ellie at such a competition in Les Arcs suffered another mild but painful concussion and had to take another 30 days off Snow. Whilst Ellie was rehabilitating at home she picked up a huge corporate sponsor in the name of Carne Group which would enable her to train and compete for the next four years taking her right up to the Winter Olympics 2022. Two weeks later Ellie Was picked up by POC the leading Ski and Snowboard helmet and body protection company.

At the End of April Ellie entered The Natural Games France in the her first Boardercross race of the season unfortunately in a training run suffering a massive concussion and was air lifted to hospital were she spent three days. On arrival at home Ellie had a package From POC with the latest most advance helmet in.

This was now a make or break decision as to whether or not Ellie could ever race again and after 90 days of rehabilitation was tested by a leading Neurologist in Grenoble and given the all clear.

This said Ellie was under no elusion that she never wanted to feel like that again. Ellie was then selected for Team GB in the World Snowboard Championships New Zealand in August and started Glacier training with the squad.

After accidentally missing a flight to a training camp Ellie took her own life on 25th July 2018 her 18th Birthday.

Two weeks after her death Boston University wrote to me asking if they could do a biopsy on part of Ellie’s brain as an article was published in the USA stating that Ellie was possibly the 4th Freeskier to of taken her own life in that year, Like NFL players most likely due to suffering CTE.

Unfortunately Ellie’s funeral had already taken place and Chronic Traumatic Encephalopathy (CTE) is a degenerative brain disease found in athletes and others with a history of repetitive brain trauma.

When I read the papers written by a leading neurologist at Boston University I was shocked to find Ellie had been suffering all and more of the symptoms.

“I miss you so much every day Ellie and pray you are in a better place.”

All my love Dad xx

The Ellie Soutter Foundation will do all it can to bring Mental health awareness and Concussion awareness to not only athletes but all children and adults.

We really need your help

Whether it is in the form of a donation or a corporate partnership. You can support our work by donating to the Ellie Soutter Foundation.

This website uses cookies to improve your experience while you navigate through the website. Out of these cookies, the cookies that are categorized as necessary are stored on your browser as they are essential for the working of basic functionalities of the website. We also use third-party cookies that help us analyze and understand how you use this website. These cookies will be stored in your browser only with your consent. You also have the option to opt-out of these cookies. But opting out of some of these cookies may have an effect on your browsing experience.
Necessary Always Enabled
Necessary cookies are absolutely essential for the website to function properly. This category only includes cookies that ensures basic functionalities and security features of the website. These cookies do not store any personal information.
Non-necessary
Any cookies that may not be particularly necessary for the website to function and is used specifically to collect user personal data via analytics, ads, other embedded contents are termed as non-necessary cookies. It is mandatory to procure user consent prior to running these cookies on your website.
SAVE & ACCEPT